Papua, Asmat, Ancestor Pole
250 cm
This horizontal ancestor pole depicts a stylized crocodile, its body covered with elaborate designs that include headhunting symbols. The head of the crocodile is surmounted by a small human figure depicting an ancestor. The form of the ancestor figure refers to a praying mantis. Praying mantises, whose females sometimes bite off the heads of the males after mating, were potent symbols of headhunting, which was formerly practiced by the Asmat. The precise nature and significance of such crocodile-shaped ancestor poles are uncertain. However, they may have been used in ceremonial contexts similar to the larger bisj poles. If so, like bisj poles, they probably served both to commemorate the dead and, in the past, to remind the living that the deceased must be avenged through a retaliatory raid on the enemy.
Collected between 1956 and 1960 in situ
With collection number of Tropenmuseum 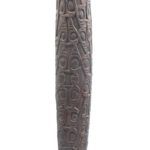 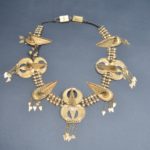