The Lobi people know spirits known as Thil, and build shrines to them, which are filled with small figures. These figures, known as Bateba, are believed to embody the Thil spirits. The Bateba are looked upon as living beings charged with special powers who move, fight against witches, and have intercourse with each other. The Lobi believe that the Bateba are superior to humans, but inferior to the Thil spirits, so the Bateba is first activated by putting it in a Thil shrine. The Bateba keep sorcerers away, and help the Thil ward off misfortune. They also play a role in the divination system. 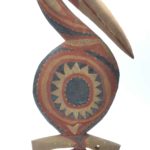