Thérèse Finette Lemaire (1919-1998)
I was named after my aunt Thérèse Finette Lemaire, but everybody called her Trees. From 1966 Trees worked in the gallery first to help her father, Mathias Lemaire, later she owned the gallery together with my father, Frits Lemaire. She had studied law, during the war she was helping the Dutch resistance, worked as a journalist for Het Parool and as a politician in the Tweede Kamer (second chamber) for the PVDA (the Dutch socialist party). Later, among many other activities, she worked for the Sociaal Economische Raad (social and economic council).
She was very knowledgeable about the objects in the gallery and really loved to read about them. However as a sales person she was not always the best. Whenever she was not in the mood to help someone in the gallery she could not hide her feelings. Later when she could not hear too well any longer, there were some embarrassing moments. If she did not like somebody she said to me just a bit too loud “dit zijn zeuren” (these people always complain). I was sure that the clients could hear that as well. Another typical thing about my aunt was her handwriting. When we used to get a postcard from her we could just about read her name but that was it. Even today I have a problem deciphering the inventory books. In the nineties I often visited London with Trees, which was a great experience visiting dealers and auctions, where we always sat on the front row. Then I also started to help her with the administration and she taught me a lot about all the objects in the gallery. Trees was a real personality and one of the first women to deal in tribal art.
Finette Lemaire
June 2020 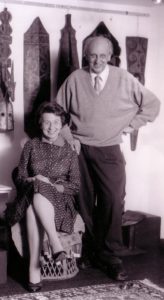 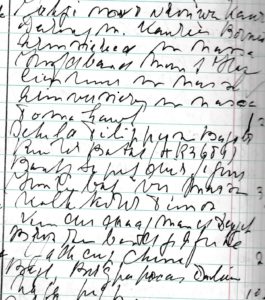 My first object of Tribal Art

My father and his many hobbies
Scroll to top