Mount Hagen, ceremonial axe, Di kurugu,
63 x 71 cm
This stone ax comes from Mount Hagen area, a high plateau in the western highlands of Papua New Guinea. The axe was used as a trade item and at ceremonial dances. The axe also served as unit to determine the bride price, the price for a bride was three to four of these axes. The ceremonial axes were stored and exchanged but rarely used or carried except in warfare and dancing. 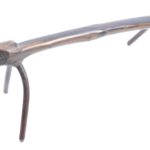 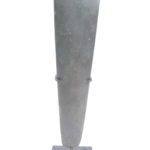