78 cm
Massim valuables often consist of ceremonial versions of ordinary objects such as axes. The axe was used as asymbol of status, as exchange good and as magical implement. They were used to present axe stones blades named Beku and served as ritual currency for purchasing both goods and services as bride-price. The blade represents the vital force of both the axe and the human body and symbolizes the right hand or reproductive organs. The ascending shaft represents the arm, the apex the head, and the handgrip the leg and foot.
The handles were often valuable objects in their own right.
€ 850 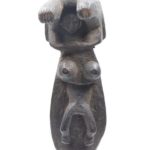 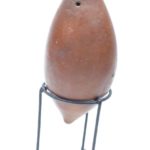