Papua New Guinea, lower Sepik, Pair of man’s armlet
5 x 10 cm
The armlet is called mouth bilong puk-puk which means mouth of the crocodile. The flap moves up and down during dances and looks like an opening and closing of a crocodile’s mouth. It is an example of the importance of the crocodile to the Sepik people.
Bought at the “Dames Wolf” Nes 89 (1956 – 1986) 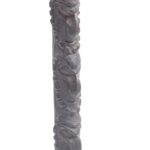