Papua New Guinea, Yangoru Boiken, Money Ring Yua
Yua are traditionally made from the shell of tridacna gigas. These shells were traded from coastal Boiken, to groups living further inland such as the Yangoru Boiken. The whole inside is drilled in its center using a stock of bamboo, and the edges are then smoothened using silica sand. Some Papuan currency were used in regular transactions, but the vast majority of exchange pieces were only traded on a few occasions: marriage feasts, purchasing high-value items such as pigs, and as bride price. In Melanesian societies, it was the duty of the man’s family to pay for his bride. The reason behind this is that in most Papuan cultures, one marries outside of their immediate village. For a woman marrying a man means she must leave her community. Bride price serves as compensation for the years of time and resources a community puts into a woman before she reaches adulthood. Bride price ceremonies involve a man usually throwing a feast, and then offering his potential wife’s family pigs, and bride price pieces such as a yua.
With certificate

Papua, Asmat, Figure made by Censimipic 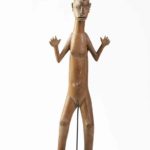 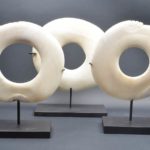